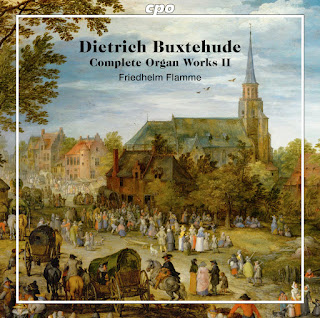 This album is Volume 2 of Friedhelm Flamme’s Dietrich Buxtehude: Complete Organ Works, a series that should run to three 2-SACD sets. Flamme has previous recorded a 15-disc Organ Works of the North German Baroque, so the complete organ music of Buxtehude is a logical next step. This volume focusses on chorale-based works, the first disc on larger chorale-based fantasies, the second on stricter chorale arrangements, although with some free-form compositions added too. This fairly loose theme allows Flamme to present works from throughout Buxtehude’s career (to the extent that precise dating is possible) and create an attractively varied program. On the first disc many of the works are based on Advent and Christmas chorales, such as Nun komm er Heiden Heiland (BuxWV 211) and Puer natus in Bethlehem (BuxWV 217), and the result is a pleasantly upbeat mood, with Buxtehude’s playful counterpoint rarely weighing down the textures or tending towards the academic.

As in Volume 1, Flamme plays the Christoph-Treutmann organ of the Klosterkirche St. Georg zu Grauhoff in Goslar, built 1734–1737. This instrument is spectacularly well suited for the project for several reasons. Goslar is in Lower Saxony, mid-way between Hanover and Leipzig, significantly further south, then, than Buxtehude’s Lübeck and the heartlands of the North German organ school. But Treutmann himself was very much of that school, having been apprenticed to Arp Schnitger. He also took in influences from further south, and, as the liner note enthuses, the result is an instrument with its own distinctive character, yet still representative of its time and place. The organ is in remarkable good condition: most of the ranks are original, as is the case, but each of the divisions also has one or two higher ranks reconstructed during a renovation in 1989–1992. The organ is tuned to equal temperament, rather than mean-tone, which, combined with its excellent condition, means that it never sounds antiquated. There is some debate about which tuning system Buxtehude himself was familiar with—if or when he moved over to equal temperament—but in three of the works here, the Toccatas in F and G, BuxWV 156 and 165, and the Canzonetta in G, BuxWV 171, the parallel thirds are clearly intended for the pure sound of mean tone, an effect Flamme imitates through a contrasting pairing of stops.

The surround sound is clear and open, with the church’s modest resonance carefully balanced against the organ. A little mechanical noise is sometimes heard, but never to distraction. The best-known work on the program is the Praeludium in G Minor, BuxWV 149, which concludes with a passacaglia-like finale, with the theme clearly pronounced in the pedal. That weighty pedal sound is more the exception than the rule in the program as a whole, and Flamme generally strives for a more even balance between hands and feet—there is only one 32-foot stop, and he only deploys it once, for the final verse of Magnificat primi toni, BuxWV 203.

Organ aficionados are well-used to high production values, and this CPO series is no exception. As well as the excellent audio, the album features compendious registration information and detailed notes, by Gerhard Aumüller, well translated from the German. An excellent release, from a series that is shaping up to be the last word in Buxtehude’s organ music.