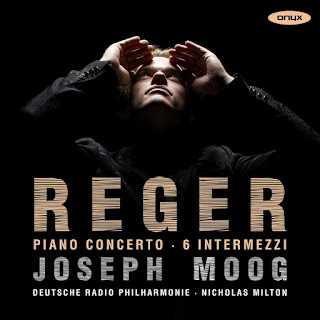 The young German pianist Joseph Moog has a been a star signing for the Onyx label. His repertoire for them has been increasingly ambitious, starting out with recital discs of Liszt and Chopin, and then moving into more adventurous repertoire, mostly late Romantic, but also including sonatas by Beethoven and Scarlatti. More recently, he has been recordings concertos, but Rachmaninoff, Tchaikovsky, and Brahms. This album, featuring the Reger Concerto, is a natural extension from the Brahms concertos. But it is a more demanding work in every way, not only in its greater technical challenges, but also in interpretive requirements—to make a coherent statement out of such a long and (in lesser hands) rambling score.

Moog, and conductor Nicholas Milton, take a suitably expansive approach, and both of the first two movements are at least a minute longer than those from Markus Becker (AVI 8553306) and Marc-André Hamelin (Hyperion 67635). The pianist’s greatest asset in the first movement is the clarity that he brings to the textures. Reger’s piano writing can sound knotty and congested, but Moog is able to separate out the notes of the running inner lines, and without disrupting the broad melodic flow. Not all the tempos are slow: the main theme is lively, and the piano’s volcanic outbursts in the development are brisk and powerful. Most importantly, Moog clearly articulates the extremes of the piano writing, both the gradual dynamic changes over long passages and the sudden, abrupt changes of mood and color.

The slow second movement is spellbinding. Moog performs the unaccompanied opening solo with a warm, dark tone and with an unpredictable but natural-sounding rubato. For several minutes, time seems to stop. The finale also opens with an unaccompanied piano statement, so again, Moog sets the tone. He is suitably declamatory here, but playful too, insistent where Reger demands, but also bringing lightness to the passages of delicate upper-register filigree.

The Saarbrucken orchestra is serviceable but lacks finesse. The string sound lacks tonal focus and the woodwinds don’t blend. The recording, from the SWR studio in Kaiserslautern, gives the piano an attractive, warm tone but sets it too far above the orchestra. This may partly be Reger’s fault. For such an imposing work, his orchestration is surprisingly modest. Often, he will accompany a huge, densely chordal piano passage with just a single double bass or cello, or the entire string section, but just playing pizzicato downbeats. The recorded sound brings clarity to these details, but they are usually too recessed behind the piano.

The filler is equally interesting, Reger’s Six Intermezzi, op. 45. These were again recorded at the Kaiserslautern studio, and on the same Steinway D. As so often with Reger, this substantial collection ranges from huge symphonic statements to delicate and nimble character pieces. The generous recording ambience enables Moog to conjure impressive drama in the grander movements, and the clarity of the sound suits the quieter music too.

Moog isn’t new to Reger—he has previously included the substantial Träume am Kamin, op. 143, on a recital disc (Claves 50-1005)—and he clearly understands the interpretive challenges. The Piano Concerto here is given a dramatic reading, but never feels too heavy-handed. With the slower tempos, Moog sacrifices some virtuosic bravado in favor of clarity and detail. But it is still a spectacular account, as symphonic and imposing as the composer intended. That sense of scale continues into the solo work that concludes the program, with Moog proving himself a dedicated and insightful companion to Reger’s erratic muse.