Suites from the scores to The Stars of Day, The Favorite, Father Sergius (arr. Strobel) 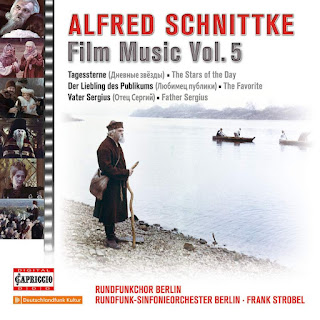 Conductor Frank Strobel is the acknowledged authority on Schnittke’s film music. His first suites were arranged with the participation of the composer in the early 1990s, and Schnittke gave Strobel permission to continue creating similar suites of his other film scores. Schnittke wrote music for around 85 films, from the early 60s to the mid-1980s, and Strobel has now arranged and recorded about a third of these. This new album is Volume 5 of his Alfred Schnittke Film Music series with the Berlin RSO, and it presents three interesting scores, a diverse selection of war-time drama, The Stars of the Day, a children’s film, The Favorite, and a Tolstoy adaption, Father Sergius.

Volumes 1–4 in this series originally appeared on SACD, but they were later released as a box set in standard red-book. Capriccio seems to have given up on the SACD medium altogether, which is a shame, especially as one of the great advantages that Strobel has over the original soundtracks is the improvement in audio quality. The recording venue has changed to, from the Jesus Christus-Kirche in Dahlem to the Haus des Rundfunks, also Berlin.

Dates and names for Soviet-era films are notoriously difficult to pin down, as a result of often lengthy delays in domestic releases and significant variance in titles for foreign distribution. So, The Stars of Day may be more familiar under the (more literal) translation Day Stars, and listed as 1968, rather than the 1966 given here. The Favorite is more usually listed as The White Poodle (the name of the book on which the film is based) and dated 1984, rather than the 1985 given here. Father Sergius is listed elsewhere as Father Serghy, although its 1978 date seems to be undisputed.

The Stars of Day is a film by Igor Talankin, the second of five on which he collaborated with Schnittke. It is based on the life of the poet Olga Bergholz and her experiences in the Siege of Leningrad. But the wartime narrative is interpolated by flashbacks to her childhood, and by one scene in which she imagines herself at a funeral in the 16th century. Most of the music presented here is based around simple melodies and clear textures, but on several occasions the mood changes, and the textures shift to dissonant and disorientating climaxes. Curiously, the sonic profile of this suite is distinct from that of the film itself. Schnittke wrote choral music, in the Russian Orthodox style, for the funeral scene, but Stroble omits this, despite having a choir on hand for Father Sergius. Also, the sound of church bells is a recurring motif throughout the film and is often incorporated into Schnittke’s cues, but again is absent from the suite.

The Favorite is a story about a poodle who becomes a circus performer. Naturally, then, a great deal of Schnittke’s score is made up of circus music. But nothing is ever that straightforward in Schnittke’s musical world, and again we get several darker asides as the more sinister aspects of the story surface. One of the tracks is an elegant but restrained waltz, which Strobel delivers with impeccable taste and panache. We also hear Schnittke’s trademark harpsichord in the “Crimea – Night – Chase” number.

Father Sergius is another Talankin collaboration, and an equally stimulating one for the composer. In the intervening years, Talankin had taken a greater interest in music, most notably through his 1969 biopic of Tchaikovsky, which was nominated for the foreign language Oscar. As a result, the conception of Father Sergius has an intrinsically musical dimension. Talankin found a waltz that had been composed by Tolstoy himself, and asked Schnittke to compose the film’s music around it. The story concerns a Russian nobleman who, after a failed engagement, becomes a monk, but then still struggles to find spiritual fulfillment. So, again, there is a strong liturgical aspect to the story and to the music—a testament to the liberalization of Soviet Russia by the end of the 70s. As in The Stars of Day, the waltz theme often dissolves into amorphous dissonance, but this time the discords are usually quiet, reflective, and sustained. The final two movements are particularly elegant. “Monlog” is a slow string-dominated meditation. “Epilog” is similar, but this time a wordless female choir sings the melody, moving in and out of synch with the violins to create blurring dissonances. Schnittke also made several settings of genuine Orthodox hymns for the score, but again these are omitted. Even so, Strobel’s work on Schnittke’s scores for Igor Talankin are particularly valuable, as Talankin himself took a laissez faire attitude to Schnittke’s contributions. At one point in the soundtrack, he takes two different cues that Schnittke had composed and overdubs them. In their final collaboration, Starfall (1982), Talankin rejected almost the whole of Schnittke’s score, retaining just a single cue and replacing the rest with Tchaikovsky.

When Schnittke retired from the film business, after his first stroke, in 1985, the same year that The Favorite was released, he lamented that the industry had always frustrated him. He had been required to produce short cues, which were usually shortened further, while his natural tendency was towards broader, more expansive musical expression. Clearly, then, Frank Strobel is doing Schnittke’s film music a great favor, restoring his cues to their original length, and recording them with a fine orchestra—a Western orchestra, but one well able to capture the Slavic essence and sound of this music. Strobel’s choices of music to include in his suites seem to gravitate towards the numbers that are already for symphony orchestra, which sometimes misrepresents the sound worlds of the films themselves, especially The Stars of Day. But the composer’s unpredictable inventiveness, and the surprisingly avant-garde effects in all of these scores, make for a continually engaging musical experience.