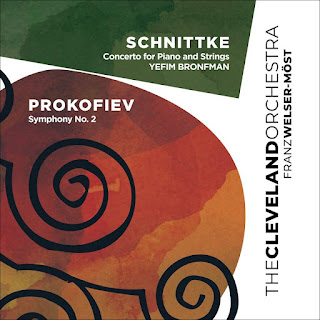 COVID necessity proves the mother of invention for this new release on the Cleveland Orchestra’s own label. Prior to the lockdown, they had a live recording of Prokofiev’s Second Symphony in the can, a recording from Miami in January 2020. When concerts were halted, the orchestra organized a series of online performances, and the Schnittke Concerto was one of these, performed to an empty Severance Hall in October 2020. The Schnittke was chosen because it only requires strings, who, unlike their colleagues in the wind section, could play masked and therefore conform the requirements of the time. But the coupling proves fortuitous, the two works making for a satisfying program.

Schnittke’s Concerto for Piano and Strings was composed in 1979, a time of deep spiritual contemplation for the composer. He was gradually moving towards adopting the Russian Orthodox faith, and all of the personal and cultural issues that raised are projected onto his music. So, in the concerto, the piano regularly imitates the sound of Russian Orthodox bell ringing, while much of the string writing is based on Orthodox chant. But there are still playful undercurrents of polystylism in the mix; at one point the pious discourse is interrupted by a jazz middle eight, the fidgety piano solo accompanied by a walking bass in light pizzicato.

All of the external references, and especially the liturgical allusions, give the music a rhetorical character, but neither Yefim Bronfam nor Franz Welser-Möst seem inclined to indulge it. At just under 20 minutes, this may be the shortest account on disc, but it rarely feels rushed. Schnittke often includes silences between sections, but these are never drawn out, which may account for the short timing. Bronfman gives a sinuous and often lyrical account, but stops short of outright violence. The written dynamics go up to fff, and many players take this as an invitation to go wild. But Bronfman always remains conscious of the music’s spiritual roots. The Cleveland Orchestra’s trademark string tone is a real asset here. They are incapable of making an ugly sound. Schnittke tests that to the limit, regularly writing dense harmonies, either based on chromatic clusters or superimposed triads. But he is always looking for a particular resonance or tonal quality. The Cleveland strings provide all those details, and the sheer variety of tone they apply to the various sections is particularly valuable. This is the first recording of the work in hi-res audio (SACD surround), and many details come through that had previously been obscured. The ending is particularly impressive. Here, the piano plays a high, single-line melody over a ppp artificial harmonic cluster in the strings. The halo of sound that this creates is magical here; on most other recordings it is close to inaudible. One miscalculation in the sound engineering though: the piano is too far above the orchestra. That is particularly apparent in the orchestra’s first entry. After a long, unaccompanied piano solo, the strings enter with a gradually accumulating ppp chromatic cluster, which eventually grows into a more complex texture, before dissolving into a descending glissando. But you’ll have to take my word for that, as the whole passage is completely obscured by the piano here.

Prokofiev’s Second Symphony is a machine-age (1924–5) industrial, ultra-modern score. Or at least, it usually sounds like that. Coming straight after Schnittke’s more dissonant but more pious music, the impression is of greater consonance, but also a greater focus on surface detail. In fact, Prokofiev was an important influence on Schnittke’s advanced harmonic thinking. What Schnittke didn’t inherit was Prokofiev’s rhythmic incisiveness, and that too comes to the fore. The audio—this time captured on tour—is again excellent, and the arresting sound of antiphonal trumpets at the opening sets the tone perfectly. After their absence from the Schnittke, the woodwind and brass make a welcome appearance, and Prokofiev keeps them all busy. Solos from the lower end of the woodwind section, especially English horn, are characterful, and the low brass bring valuable weight of tone. As with the Schnittke, this is a relatively fast account, but one that sounds more spacious and luxuriant than its timings suggest. Welser-Möst doesn’t articulate the music with hard or percussive attacks, and it is difficult to imagine that sort of approach according with the broad Cleveland tone. So a score that is usually hard and dry here becomes round and rich. It still works, but the results are not as mechanistic or as radical as Prokofiev seems to have intended.

This is the third release on the Cleveland Orchestra’s own label, and as with the previous two, the disc comes in packaging designed to look like a concert program. The album seems designed for subscription ticket holders, as a stopgap while concerts are on hold. Given that, the programming is impressively adventurous, as was their previous release, which coupled Schubert’s Ninth with Křenek’s Static and Ecstatic. Inside the cover, there is a code to download the album. Mp3 and FLAC downloads are offered, the latter in standard CD resolution.