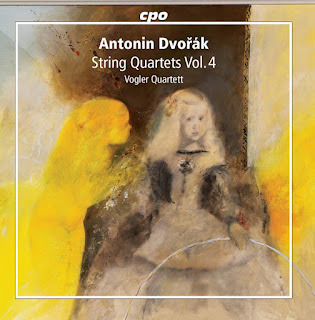 Exploring the early works of Antonín Dvořák is always rewarding. The composer himself saw the 1850s and 60s as a kind of apprenticeship, a long and arduous transition from orchestral viola player to full-time composer. But he was prolific in these years, and there are some real gems in the catalog. The István Kertész recording of Dvořák’s First Symphony (1865) revealed the sheer energy and vitality of this long-forgotten score. A 2014 recording of Dvořák’s first opera, Alfred (1870, Arco Diva 0089948426097), is another eye-opener, a work of real dramatic conviction, at least on CD. Few of Dvořák’s early scores were performed during his lifetime. When the composer finally established a reputation, in the 1870s, he was happy for these early works to be passed over, and given the quality of his later music, audiences were happy to take that instead. Fortunately, many of these early works were revived in the mid-20th century, scholars often having to reconstruct scores from parts, as in the case of the Second Quartet, B 17, which opens this program.

The Second Quartet (the number was only attributed after his death) was one of three quartets, Nos. 2–4, that Dvořák composed under the influence of Wagner. That influence was far from direct. Dvořák had performed a concert under Wagner’s baton in Prague in 1863, and the result was a complete cessation of composing for several years. The three quartets followed on, this one probably around 1868, and show Dvořák experimenting with new and radical approaches. The entire quartet is based on a single motif, a rising arpeggio figure, and the work is huge, just under 50 minutes in this performance. But those Wagnerian attributes are balanced against a relatively traditional four-movement form. In the first movement, the textures veer between thinly voiced parallel octaves and startlingly complex counterpoint. Development, in all the movements, is ambitious but meandering—the Beethovenian rigor of the later symphonies is nowhere apparent. Nor is there much Slavic flavor, even in the sprightly Scherzo. Dvořák’s later habit of incessantly repeating a heavily accented motif is heard, but without yet the textural richness to justify it.

The Fifth Quartet, B 37, dating from around five years later, 1873, is closer to the Dvořák we know. The scale is more manageable, just over 30 minutes, and the music has more character and focus. The slow (Moderato) introduction is particularly attractive, and the way the movement gradually builds as it goes on is beautifully handled. The second movement, Andante con moto quasi allegretto, is a classic Dvořák serenade, a breezy violin melody over a gentle but insistent pizzicato bass.

The Terzet, op. 74, is a much later work, from 1887, awkwardly shoehorned into this program to fill a gap in CPO’s complete Dvořák quartets edition. Dvořák found himself in an ad hoc ensemble of two violins and one viola, and composed the work for lack of any other repertoire for this combination. It is more a collection of vignettes than a suite or trio, but all are attractive and well proportioned.

The Vogler Quartet give clear, precise accounts. Thier tempos are steady and rubato is minimal. In the early quartets, this serves to emphasize the distance from Dvořák’s mature style, and the Second Quartet, in particular, sounds highly experimental in this account. The recorded sound has some studio-applied resonance, but it lacks warmth. A marked stereo separation between the violins (left) and the viola and cello (right) gives the impression of a close perspective, but this is compromised by the resonance around the violin sound.

Comparison with other recordings—the accounts in the complete Dvořák cycles from the Panocha Quartet (Supraphon) and Prague String Quartet (DG)—shows a range of approaches to these problematic scores. The light, violin-prominent textures of the Vogler Quartet may be down to Dvořák’s lack of experience in scoring for string quartet. The two Czech quartets are able to ground their textures in a stronger bass, in the case of the Panocha Quartet partly through the intensive vibrato of the cellist. The Czech players also have a more organic conception of the music’s structure: The first movement of the Second Quartet doesn’t sound as fragmented or episodic in those accounts. And the Voglers’ lack of sympathetic rubato is highlighted by the flowing phrases and smooth transitions of the earlier accounts. The Panocha Quartet also adds ornaments to the melody of the Second Quartet’s third movement, bringing out some Czech character absent from the present account.

The Vogler Quartet gives a more modern reading of these scores, and the cleaner textures are often more attractive than those of the vibrato-laden earlier accounts. But the cost is a reduction in drama and involvement. All of which raises the question—are the Panocha and Prague String Quartets raising Dvořák’s early music to the status it deserves, or are they just saving the young composer from himself?