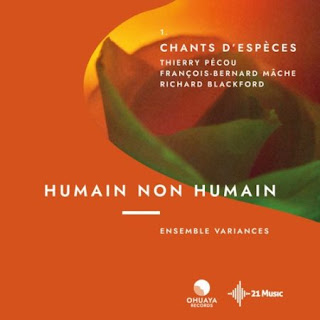 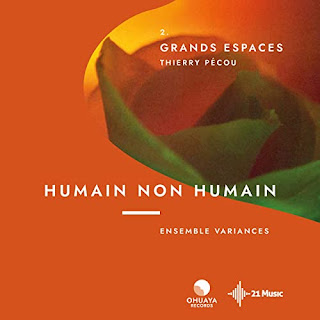 This double album (download/stream only) from Ensemble Variances is entitled Humain non Humain I and II. Both showcase the work of the Ensemble’s conductor and resident composer, Thierry Pécou. His music takes in various ethnic influences, here from the Americas, and sounds from nature, particularly whale song. The results are atmospheric but always modern-sounding, and always engaging enough to be more than mood music. Crucially, Pécou applies his environmental ideology with a light touch: His ideas permeate the music, but this never feels like concept album or moralistic discourse.

The first album is titled Chants d’espèces. The main work here is Vigiles by François-Bernard Mâche. The concise but well-translated liner note tells us that Mâche has been experimenting with birdsong and sounds from nature in his music for many decades, and he is clearly a major influence on Pécou’s own music. Vigiles is for a small woodwind/keyboard/guitar ensemble and recorded birdsong (nighttime birds, including nightingale). Mâche transcribes the birdsong and then arranges it for the ensemble. Rather than notate every detail of its structure, Mâche instead just gives the broad outlines, and when these are played along to the original, the result is an engaging but relaxed heterophony. More complexity is introduced later on, with call and response between the birds and the ensemble, but the concept is always clear. The sound of piano and solo woodwinds playing fast, complex music in unison is reminiscent of the Ensemble Modern album of orchestrated versions of Conlon Nancarrow’s player piano studies (RCA 09026 61180 2). The difference is that you never get the feeling here that Mâche is exploring complexity for its own sake.

The album opens and closes with works by Pécou based on whalesong. Méditation sur la fin de l’espèce is for solo cello, ensemble, and “processed” prerecorded songs of humpback, killer, and beluga whales. The most compelling sound in the mix is that of the cello, playing sliding double-stops on its lower two strings to imitate the whale sounds. High flageolet is also put to effective submarine use. In the ensemble, the contrabass clarinet has a lot of useful sounds here too, growls and overtones. The relationship with the recorded whales is free, with the instruments more predominant than the whales. A short work for ensemble and tape closes the album, Mada la baleine. This seems like a study for the first work (both are dated 2017), this time with a humpback whale on the tape and the ensemble improvising on motifs derived from its song. Also on the album is Murmuration for flute and clarinet by British composer Richard Blackford. Despite being the only non-French composer on this set, Blackford is the closest to Messiaen in his approach to birdsong. It’s not quite as erratic as Messiaen though, as Blackford is also attempting to trace the contours of flocks of birds in flight. He achieves this effectively through broad dynamic contours and subtly evolving textural shifts.

The second album, Grands espaces, focusses more on the “Humain” side. Nanook Trio for clarinet, saxophone, and piano, is based on music that Pécou composed to accompany the 1921 silent film Nanook of the North. In the second of its three movements, Pécou emulates a technique of Native American singing that he describes as a “hiccup.” A simple, repetitive melody is divided up between two voices, here clarinet and saxophone, resulting in erratic interactions, sometimes dialogue, but just as often overlay. The outer movements are more generalized evocations of snowscapes, the textures often brittle, especially from the upper register of the piano. The album closes with Chant inuit, a more straightforward setting of the second movement melody for solo cello.

Pécou’s Piano Sonata has no explicit subject or narrative, but explores a similar sound world. The composer tells us that it was “inspired by the kabbalistic concept of the Sephiroth, the 10 emanations of the primordial light.” He translates this to 10 chords, which are heard “wriggling” throughout the piece, through tremolo and arpeggiation. The result tends towards Spectralism, although with less complex harmonies and more movement in the broken chords. Pécou understands “sonata” here though its etymology “to ring,” and so the structure is more an exploration of these resonances than a traditional developmental progression.

Pécou’s approach to ethnography is always abstract and creative, never more so than in Sikus for cello and electronics. The starting point here was research by the ethnomusicologist Mónica Gudemos into the music of pre-Hispanic civilizations of the Andes. Pécou talks of attempting to reconstitute this music in his work. Thankfully, though, his creative energies are more focused on the broader social and religious significance of music in these cultures. In the work, he samples Andean pan pipes, and then creates a complex, prerecorded environment for the cello, with the pipe sounds radically transformed and then projected to eight speakers around the audience and soloist. The soloist responds in much the same way is with the earlier whale song, imitating the overtones and formant identities of the recorded sounds, in increasingly sophisticated dialogue with the tape.

The performances by Ensemble Variances are excellent throughout. Special mention should go to the cellists, David Louwerse, Stéphanie André, and Lucien Debon; the instrument is clearly central to Pécou’s musical imagination, and both players are on his wavelength. The recorded sound is warm and clear, and well balanced between the prerecorded tracks and the performers. It is a shame, though, to miss out on the eight-track spatialization in Sikus. Thierry Pécou is a unique voice in the world of environmentally engaged new music. He’s somewhere between John Luther Adams and Gérard Grisey, and fans of either of those luminaries will find much to enjoy here.