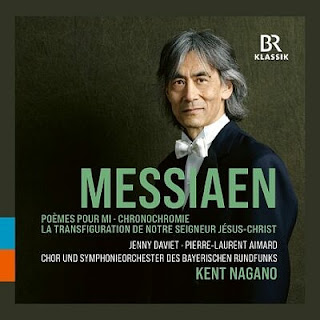 Kent Nagano is a seasoned interpreter of Messiaen’s music. The conductor befriended the composer in the early 80s, regularly visiting Paris and taking piano lessons with Messiaen’s wife, Yvonne Loriod. To date, his recordings of Messiaen’s music have been few, but each has been notable. His 1999 recording of the composer’s only opera, Saint François d’Assise (DG 445 176-2) remains the benchmark, and his recording of the Turangalîla-Symphonie with the Berlin Philharmonic (Teldec 8573820432) leads a crowded field. Nagano’s relationship with the Bavarian RSO is more tenuous. He is familiar to Munich audiences from his tenure at Bavarian State Opera 2006–2013, but has only guest conducted the radio orchestra. However, the relationship has developed in recent years, with Nagano taking up the slack as Mariss Jansons became increasingly frail. These recordings are taken from live performances 2017–19, and find both conductor and orchestra on top form. The box set has been issued by BR to mark Nagano’s 70th birthday.

La Transfiguration de Notre Seigneur Jésus-Christ (1965–9) is a rarity on disc, and with good reason. The large-scale oratorio calls for a huge chorus as well as soloists on flute, clarinet, xylorimba, vibraphone, marimba, cello, and piano. All have challenging parts, yet this is hardly a virtuoso showpiece. Instead, the theological implications of Christ’s transfiguration are pondered at length. The basic texture is slow, homophonic choral writing, regularly interrupted by the orchestra, and by the soloists, whose parts are dominated by birdsong. It’s like Turangalîla-Symphonie but without the erotic edge. Fortunately, this performance gives the work its full due, with Nagano and his ensemble beautifully projecting Messiaen’s rich colors and textures. Pierre-Laurent Aimard—a regular Nagano collaborator—is criminally underused, but his playing is bold and focused. The score is dominated by percussion, both solo and ensemble, which is all captured in excellent sound. In particular, the spacious resonance around the solo xylorimba and marimba make you feel like you are the hall with them.

The oratorio takes up the first two of this three-disc set. The final disc is devoted to a song cycle, Poèmes pour Mi (1936–37) and an orchestral showpiece, Chronochromie (1960). French soprano Jenny Daviet is ideal in the song cycle. Her voice is rich and operatic, with a robust but well-controlled vibrato. Although the orchestral playing is excellent throughout the set, the strings and winds take a back seat, to the percussion in the oratorio and to the soprano in the song cycle. But in Chronochromie, they get a chance to shine. German precision and sophistication can be a mixed blessing in Messiaen. When Rattle performed Turangalîla with the Berlin Philharmonic, the velvet sheen of their strings seemed like a distraction from the composer’s clean, penetrating textures. Fortunately, the Bavarian strings don’t sound too plush. They don’t sound French either, but it’s no great loss. The orchestra provides Nagano with the precise, powerful sound he needs. When, for example, Messiaen writes a huge unison/octave crescendo for the whole orchestra, Nagano carefully shapes the sound, timing the increase of intensity with astonishing precision. And again, the engineers of Bavarian Radio do an excellent job with the sound, raising the question of why the acoustic of the Gasteig is so controversial.

The packaging for this set is overly indulgent. A reorganization could easily have reduced the three discs to two, and the box they come in is big enough for 10. The booklet includes texts, with German and English translations. There is also an essay from Nagano about his time with Messiaen and Loriod. Frustratingly, this comes in place of any information on the works themselves, a serious omission, especially given the obscurity of La Transfiguration.