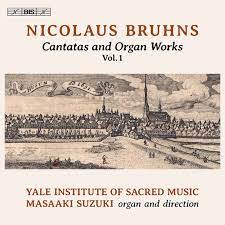 Nicolaus Bruhns (1665–1697) was a distinctive voice in the North German middle Baroque, but he fits uneasily into our Bach-focused understanding of the era. Bruhns was a pupil of Buxtehude. After his studies with Buxtehude in Lübeck, and a short period in Copenhagen, Bruhns took up a position as organist in his home town of Husum, close to the present-day border with Denmark, and died in post aged just 31. Contemporary accounts tell us that he was a proficient violinist, but the small body of his work to have survived is made up of only church cantatas (called “sacred concertos”) and solo organ works. This album, titled, Cantatas and Organ Works Vol. 1, gives a good overview of that surviving music. BIS has squeezed over 86 minutes of music onto the disc, a feat that should mean they can complete this Bruhns survey with just one more volume.

The organist and director here is familiar, Masaaki Suzuki, the ensemble less so, Yale Institute of Sacred Music. This is a graduate center at Yale, which apparently takes an interdisciplinary approach to its subject, while clearly focusing on early performance practice for instrumentalists and singers at postgrad level. The orchestra here appears to be a mix of faculty and students. The three singers are all professional, and one of the tenors, James Taylor, is professor of voice at Yale. That mix suits Bruhns, as his vocal music poses significant challenges to the soloists—especially in the long cadential melismas—while the instrumental writing is more straightforward and demure.

Suzuki (and BIS) bring the same sound profile to this music as they do to Bach recorded in Japan. The tempos are fashionably brisk, though never sounding rushed by HIP standards, rubato is used sparingly to shape vocal phrases, and vibrato is absent. Of the three singers, bass baritone Paul Max Tipton gets the most exposure. He is a younger singer than we usually hear for low voice parts in Baroque music, and the agility and freshness of his tone are a real bonus. Tenors Dann Coakwell and James Taylor are just as impressive. There is little to distinguish them, but the result is a satisfying blend when they sing together. The Bruhns cantatas are generally around 10–15 minutes, sectional but without distinct movements, without choir and without punctuating chorales. Nevertheless, most are derived from Lutheran chorale themes, though there are some Latin texts too, including the De Profundis that opens the program. The instrumental forces are modest: two violins, sometimes violas and gambas, and continuo, here made up of cello, theorbo, dulcian, and organ.

The recording was made at the Marquand Chapel at Yale, which is evidently a mid-sized church with an ideal acoustic for this music. The sound is immediate, but with sufficient resonance for a liturgical aura. Suzuki plays the chapel’s Krigbaum organ (2007), an instrument so well suited to this repertoire as to suggest it was the main reason for recording the album. The cantatas are punctuated with two solo organ works, and both are highly distinctive. The Praeludium in E Minor begins with an extraordinary chromatic flourish. It soon settles down, but that chromaticism still occasionally comes to the surface in the contrapuntal lines, as it does in the second solo organ work, the fantasia on Nun komm, der Heiden Heiland.

The character of the organ no doubt defines many aspects of this performance. The pitch convention is a very high 465 and the temperament is 1/4 syntonic coma meantone. That, combined with the vibratoless strings, makes for an uncompromisingly HIP sound palette. But that is balanced by the warmth and expression of the vocal performances, and by Suzuki’s always inventive registrations. Full texts and in informative note from Yale’s own Markus Rathey round out a compelling release, well up to Suzuki’s impeccable standards.