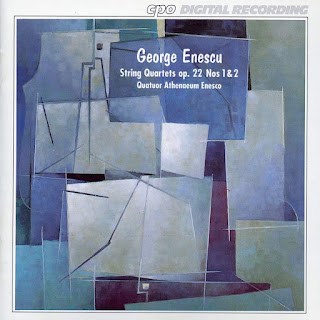 Enescu grouped his two string quartets under the same opus number, 22, but they were composed more than 30 years apart. The First was written 1916-20, straight after the Third Symphony, the Second in 1951, four years before the composer’s death. In fact, the Second had been in gestation for decades, so there is more continuity than the dates suggest. That said, the two works are stylistically distinct. The First is long (over 45 minutes) and complex, the Second is shorter, though still around 25 minutes, more folk-oriented but also more modern in its language, combining elements of serialism with the (still clearly functional) G-Major tonality.

Both are satisfying works, especially the First. It presents the listener with a constant stream of new textures and ideas. This is sophisticated and inspired music, and it never gets bogged down. Enescu keeps the textures light and the rhythms fluid. As a virtuoso violinist himself, he knew how to draw effective textures from his ensemble, and in this work regularly gives detailed instructions for bowing and phrasing. One favorite sound is high harmonics played sul ponticello, an eerie, glassy effect that comes to define the sound.

That effect returns in the Second Quartet, but in general this work feels more linear and discursive. The folk elements are more ubiquitous than the serial techniques, and the melodic lines are often gracefully ornamented. Both works recall the contemporaneous quartets of Bartók, but Enescu is always more consonant, and usually more relaxed.

The performances by Quatuor Athenaeum Enesco are excellent. Balances between the instruments are finely judged, and the clarity of texture, so crucial to the First Quartet, is carefully maintained. Only in the sustained climax at the end of the First Quartet does the tonal control begin to slip, with the first violin’s (very) high notes beginning to grate. The recorded sound is very warm and resonant, but that suits the aura of this music, which always tends towards coherent, inclusive textures, even at its most contrapuntal. The recording dates from 1992, and if there is a slight sense of haze around the ensemble, that is the only clue to the recording’s vintage. And, again, it fits well with the music.

The recording was originally issued in 1993 and is now being reissued in exactly the same packaging, albeit at mid-price. Since it first came out, an impressive alternative has also appeared, from Quatour Ad Libitum on Naxos (8.554721). Interpretively, the two accounts are very similar, though the Athenaeum version is more atmospheric, while the Ad Libitum has more structural focus, especially in the sprawling First Quartet. More significantly, the Naxos recording does not have the expansive, resonant sound of the CPO; it is a more traditional studio ambience, and the results feel more intimate. But the Athenaeum version is equally recommendable, whatever the reasons for its reappearance.