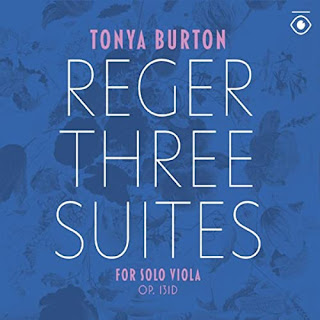 The Reger Viola Suites are a staple of solo viola repertoire. That can partly be explained by the paucity of chamber music for solo viola, but also by how deftly Reger fills the gap. The three suites are part of his op. 131, which also includes Preludes and Fugues for Solo Violin, Canons and Fugues for Two Violins, and Three Suites for Solo Cello. All are in an uncontrived neo-Baroque idiom, with Reger channeling Bach at every turn, yet always retaining his late Romantic outlook and never resorting to pastiche. All four of the op. 131 sets are deservedly popular, the Viola Suites particularly so, given Bach’s oversight in not providing solo works for the instrument himself.

Tonya Burton is a DC-based violist. She is active in chamber music, as a member of the KINETIC ensemble and Natonya duo (with clarinetist Natalie Groom), and as an orchestral player with the Kaleidoscope Chamber Orchestra in Los Angeles. She is also studying towards a Doctorate in Musical Arts at the University of Maryland. This album is her debut release.

The big interpretive question with this music is how to balance the Baroque stylings against the predominantly Romantic idiom. Burton’s approach is to play with broad and direct expression, while avoiding excesses of rubato and dynamic. Here, and throughout his work, Reger gives copious dynamic markings. Burton acknowledges most of these, but avoids the sudden and extreme dynamic shifts that the markings often imply. The result is a greater sense of continuity, allowing Burton to project the music’s long lines with apparent ease.

Technically, her performance is close to perfect. The richness and evenness of tone that she achieves in the lower and mid-range is sometimes compromised in the upper register, where her sound can become astringent, but even here the tuning is impeccable. Vibrato is tasteful and modest, and double-stops are all even and clear. Rhythms are more regular than we might expect in a Baroque suite, and Burton does not dig into the lower strings on downbeats for rhythmic impetus. However, in passages of continuous running sixteenths—in the finales of all three suites—she makes emphatic rallentandos into the returns of the main theme, much as a cellist or violinist would in Bach. Reger’s themes are always inventive, but when his developments tend toward uniformity, usually as protracted sequence episodes, Burton is always able to keep the performance interesting through imaginative phrasing.

The recording was made in the Church of the Resurrection in Lutherville, MD, and the sound is nicely resonant without being obtrusive. The viola is recorded up-close, but there is a suspicious absence of extraneous noise—bow sounds and breathing are wholly absent. Packaging is a slim, three-way gatefold with cursory notes on Burton, Reger, and the Suites. No duration is given on the packaging or in any of the publicity, so take note that this is a short album at only just over 50 minutes.