Jagden und Formen was a huge hit on the European contemporary music scene in the early 2000s. In a genre dominated by short, aphoristic works that sit uncomfortably together in concert programs, Rihm’s score is a substantial hour of music, with an innovative structure that fully justifies its scale. It is written for chamber orchestra, but with single strings, ideal for new music groups like Ensemble Modern, Ensemble Intercontemporain, and the London Sinfonietta, all of whom performed the work after it appeared in 2001, and to great acclaim. A recording was made for Deutsche Grammophon in 2002 by Ensemble Modern conducted by Dominique My (4715582, reissued in 2014 as 479345), and it too was highly praised.

The title means “Hunts and Forms,” and relates to Rihm’s highly intuitive approach to composing the work. In a 1996 interview published in the liner of the present release, Rihm explains his ambition: “There is a moment when the chase after (a) form suddenly shifts into (its) form. But that moment cannot be captured; at best, it can only be conjured up.” In other words, the music is in a state of contingency, with its material resisting the formalizing tendencies of repetition and even of traditional development. Themes and ideas continually recur, but transformed and merged. The results play on the mind: you often feel you have heard the same music earlier in the piece, but you’re not sure, and if it is the same, the transformation is beguiling. Rihm employs repeated-note textures, and often dry, woodwind-forward sounds. The sonic palette owes much to American Minimalism (especially late Reich), but the harmonies and rhythmic complexity come from European post-war Modernism.

That dichotomy, between hunts and forms, transcends the structure of the work itself and also applies to the music’s genesis and revision history. The 2001 score was based on three shorter works written in the 1990s. Rihm’s “hunt” for a larger form meant expanding the transformations with those works into the 50 minutes of so of the 2001 score. And even then, he made clear that the score remained provisional, that it was in the nature of the music never to have a completed, definitive edition. Accordingly, he then returned to the score again, and the version recorded here is from 2008. The good news is that Rihm never reduces the quantity or sophistication of his material; each version maintains everything from before, enriched with “comments, admissions, expansions, overwritings, insertions, and so on.”

This new recording is 10 minutes longer than its predecessor. The interpolated sections include many smaller ensembles, and the score now has a greater focus on the alto range, with the duet of English horn and viola a prominent element. The “overwriting” involves more lines of counterpoint in the ensemble textures. This is all very rhythmic music, and the increased rhythmic sophistication has the result of distancing the music from its earlier associations with Minimalism. The music is no longer driving and insistent in the same way.

But revisions aside, that impression may come from differences in performance between the two recordings. Ensemble Modern achieved a very high standard in their original account. The atmosphere is electric, and Dominique My is able to maintain a sense of febrile unpredictability across the work’s huge span. DG create a detailed and immediate sound picture, with biting percussion and rich bass (especially from the electric bass guitar). This new recording, made in Munich by members of the Bavarian RSO in June 2021, doesn’t match its predecessor in atmosphere or sonic detail. It is still good, and the woodwind playing in particular is fully up to the strenuous demands of the score. The audio, from Bavarian Radio, is good too, especially for those woodwind ensembles. But the sound lacks the presence of its predecessor, and the bass is less substantial. Conductor Franck Ollu successfully navigates the complexities. The greatest challenge is to maintain the overall continuity, while also creating different moods and textures in each of the sections (the disc has 16 tracking points for these, the DG account has 15). He manages that well, and also gauges the balance between the sections astutely.

The album is valuable for recording Rihm’s most recent thoughts on this score. It is a satisfying “Jagd” to go over the two versions and identify the changes—an extension of the listening experience within the work. But this new account does not supersede its predecessor, in large part because the DG account was so fine. The recording is released on Bavarian Radio’s Musica Viva imprint to celebrate the composer’s 70th birthday. Herzliche Glückwünsche, then, to Wolfgang Rihm! 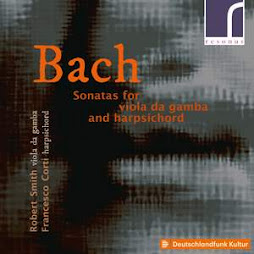 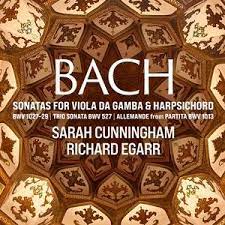 Bach’s viola da gamba sonatas are staples of the repertoire, but, as these two releases show, there is plenty of scope for interpretation. Of the three, only the G-Major, BWV 1027, survives in Bach’s own hand, and the later sources differ considerably in terms of articulation and phrasing. There is also a satisfying stylistic diversity between the three works. They were previously thought to date from Bach’s Cöthen period, 1717–23, but recent research by Christoph Wolff and others points instead to the 1730s/40s and Leipzig. Tellingly, the style of the works themselves is little clue: Bach remained the staunch Baroque contrapuntalist, even as the Classical age was unfolding around him. That is clear both from his choice of solo instrument and from his close alignment to the trio sonata model, especially in the G-Major Sonata, but significantly so in the other two sonatas as well.

Gambist Robert Smith and harpsichordist Francesco Corti are at the stricter end of the period performance spectrum in their accounts of the sonatas. Smith’s gamba (Pierre Bohr, after Colichon) has a light tone, and his delicate bowing emphasizes the higher partials. Tempos are brisk and steady, and Corti’s harpsichord (Christoph Kern, after Mietke) provides an even, cleanly defined texture beneath. The harpsichord, too, is light of tone, and the balance between the instruments is always well maintained, with the duets between the right hand and the gamba playful and clear. This recording presents the three sonatas in the reverse of the BWV order: 1029, 1028, 1027. That focusses attention away from the G-Major, 1027, a smart move given its greater familiarity.

The three sonatas don’t fill a disc, and there are no obvious fillers, even from Bach’s vast catalog. Smith makes two additions. The first is a sonata by Christopher Schaffrath (c. 1710–1763), a younger contemporary, based in Dresden. Schaffrath, too, is looking back in his writing for gamba, but not as far as Bach, and this is a much more galant work, with longer melodies and less focus on counterpoint. An elegant addition, especially in this sparkling rendition. The other filler is a work of Smith’s own devising, Dido’s Torment, an updated gloss on Dido’s Lament. The fact that this also fits into the program (just!) highlights the variety of styles and moods in the Bach sonatas. Smith’s sound is much broader here, suggesting that the lighter tone he adopts for the Bach is a conscious choice.

Sarah Cunningham and Richard Egarr take a different approach. Although harpsichordist Egarr has more name recognition, he takes a back seat to gambist Cunningham, who very much leads these accounts. She applies rubato—or at least emphatic phrasing—the way you might expect in an unaccompanied suite, and Egarr follows her lead. The tempos are slower than from Smith and Corti, and considerably slower than the norm. That can be a risky strategy: when a long note is held on the gamba, there is no scope for vibrato, and plainness of tone can become an issue. But Cunningham applies imaginative bowing techniques, often subtly modulating the sound towards the end of a held note. And Egarr always has much counterpoint to contribute beneath. A more resonant instrumentarium also helps, the gamba by Jane Julier, after Bertrand, the harpsichord by David Rubio, after Taskin. Another problem for gambists is the narrowing of tone in the upper register. That comes to the fore in the second movement, Allegro ma non tanto, of the G-Major Sonata. Both gambists sound more attenuated here, but Cunningham comes across best, still maintaining color and vibrancy in her tone.

The fillers on the Cunningham release are more traditional, a Bach trio sonata arranged for gamba and harpsichord, and the Allamende from the Flute Partita, BWV 1013, transposed down an octave and a half for performance by solo gamba. In the trio sonata, the high register again becomes an issue, and the fact that it is so rarely a problem in Bach’s own gamba sonatas suggests he was aware of this. The Allemande is elegant, but Cunningham’s stately pace draws it out to almost 10 minutes, which seems an indulgence.

Two attractive recordings, of much-performed repertoire. Sarah Cunningham and Richard Egarr offer the more approachable version, more directly expressive and warmer of tone. Robert Smith and Francesco Corti seem more disciplined by comparison. They are probably closer to the HIP consensus in a version that is more about rhythm and accent than tone and sustain. Take your pick.