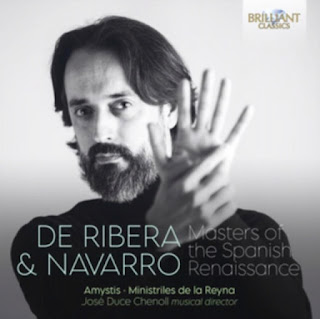 This album focusses on the yearly years of Tomás Luis de Victoria. The composer was born c. 1548, and his earliest musical training was as a boy chorister at the Cathedral of Ávila. In 1565 he moved to Rome, where his training continued at the Roman College. The works presented here give a snapshot of the Victoria’s formative musical influences, from two composers who were dominant in liturgical music in Ávila in the mid-16th century, Bernardino de Ribera (c. 1520–c. 1580) and Juan Navarro (c. 1530–1580). The program is rounded off with two works by Sebastián de Vivanco (c. 1551–1622), a classmate of Victoria in Ávila, and a Slave Regina a 8 by Victoria himself.

The motivating force behind this project is the musical director, José Duce Chenoll. He explains in the (excellently translated) liner note that the recording came about as a result of his research into original sources in archives at Valencia, Ávila, Toledo, and Valladolid. Most of the works have been recorded before, but are presented in new critical editions by Chenoll himself. There are several recording premieres though, most of the Navarro works and the Sanctorum meritis, a short hymn by Vivanco. These are taken from the Santiago Codex, an early 17th-century manuscript containing works by many composers of the day, but dominated in both quantity and quality (so writes Chenoll) by the music of Navarro.

Chenoll also writes about the difficulties of recording this album during the pandemic, in September 2021. But impressive results have been achieved, in the acoustic of the Church of Santa Maria in Requena, Valencia. The choir, Amystis, is made up of two female sopranos and alto, countertenor, tenor, and bass. The singers are accompanied throughout by Ministriles de la Reyna, performing mostly as a cornett and trombone ensemble, but with two players also doubling occasionally on dulcian.

The results are warm and clear. The quality of the music is high, and the Victoria work that closes the program does not overshadow its predecessors. Perhaps there is a little more variety in the elaboration of the counterpoint in the Victoria, where the other composers employ stricter imitation and shorter phrases, but it is a matter of degree. The singing tone is bright but not bland. The instrumental ensemble is particularly impressive, the cornetts played with plenty of character and the trombones are richly voiced for Renaissance narrow-bore instruments. Chenoll tells us that the singers employ period Spanish pronunciation of the Latin texts, but their articulation is not good enough to make this out.

One final word on the album cover. It shows Chenoll holding out his left hand and pointing at the inside knuckle of the little finger. This is a reference to the Guidonian Hand system of choral direction, a didactic tool for liturgical singing in the Renaissance, of which the young Victoria would no doubt have been familiar. That is a nice touch, and it makes for a striking image to introduce this original and enlightening album.