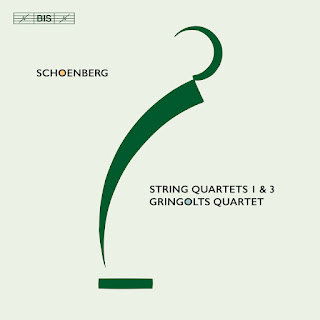 The Gringolts Quartet here complete their two-disc survey of the Schoenberg string quartets for BIS. The Second Quartet is the “hit” of the cycle, so naturally that appeared on Volume 1. But the other three are more than just fillers. They chart the course of Schoenberg’s style, from the Expressionist First Quartet of 1905 (there is also an unnumbered 1898 Quartet, rarely anthologized) to the 12-tone explorations of the Third (1927) and Fourth (1936).

The First Quartet was written just a few years after Verklärte Nacht (1899). The harmonic language is similar, tonal but with disconcerting quartal and Wagnerian harmonies. Some of the upbeat music of Verklärte Nacht is also recalled, but generally, this is more goal-focused and less Impressionist music. The Third Quartet is a 12-tone work. It, too, is propulsive and dynamic, Schoenberg now relying more on rhythmic impetus in the absence of functional harmony.

Stylistically, both works have a foot each in fin de siècle Viennese Romanticism and mid-20th-century Modernism. The small but impressive catalog of recordings available—Kolisch, Juilliard, LaSalle—document several generations of players, all with a keen understanding of the composer’s transitional status and the competing demands of his music. In fact, Schoenberg’s notation and performance directions are commendably precise, and the differences between performances are slight, at least in terms of tempo and dynamic.

The closest comparison to this new recording is with the Fred Sherry Quartet (Naxos 8.557534, 8.557533). Like the Gringolts, the Fred Sherry recordings are clean, precise renditions in modern studio sound. The issue of “name” quartets comes up in the comparison: Sherry plays the cello, and those renditions seem to be led from the bottom as these new ones are from the top. But the common factor is a general avoidance of Romantic indulgence and a focus on tight, accurate ensemble.

The Gringolts are even more precise, and seem to play as one. In particular, unison and octave passages (more common in the First Quartet) are so precisely tuned as to sound like a single instrument. The common vibrato style plays a significant role. Each of the players employs a narrow but often intense vibrato. Again, that serves to balance the Romantic and Modern tendencies of the music, and to focus the sound. The players’ allegiance to Schoenberg’s performance directions can sometimes tend to the pedantic. In particular, transitions that are marked with tempo changes across a few bars feel sudden and externally applied. Schoenberg, it turns out, is more reliant on Romantic phrasing than these players are willing to admit.

The recording is a co-production with SRF Radio in Switzerland and was made at their studio in Zurich. The sound is up-close and dry, much more so than on in-house recordings from BIS. That suits the more austere Third Quartet better than the First, but both would benefit from more space around the ensemble. The distribution around the surround speaker array is good, though, and very involving. Informative liner notes from Arnold Whittall complete an attractive package.