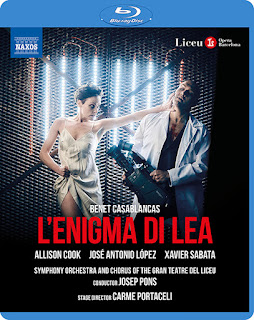 L’Enigma di Lea is the first opera by Spanish composer Benet Casablancas (b. 1949). The libretto is by novelist Rafael Argullol, and the work was commissioned by the Liceu Opera in Barcelona. This video, a collaboration with Televisió de Catalunya, presents the first production, from 2019. Casablancas locates himself in the European Modernist tradition (he was a pupil of Fredierich Cerha), and the opera, too, draws on many of the narrative and character architypes that developed over the course of early 20th-century opera.

The plot begins in “a mythical age,” and with an act of mythical, or metaphysical, violence. Lea dances alone, but is struck down amid complex lighting effects. We are later told that she has been raped by a god, but that this has bestowed on her a secret wisdom that everyone she meets will desire. We then meet two guards, Milleocchi and Millebocche, who are to accompany her as she travels to the modern world. Then comes an encounter with the Three Ladies of the Frontier, warrior types, all of whom have mystical prophesies to deliver. Finally comes Ram, the love interest, although he is introduced in a death-like state, and the relationship is a gradual process of Lea bestowing on him her life force.

The second part takes place in the here and now, i.e., 2019. Lea is confined to a mental institution, overseen by Dr. Schicksal, previously a circus ringmaster but now a megalomaniac psychiatrist. Attention shifts very much to him, but when Ram reappears, the tension becomes between Schicksal and Lea over his destiny. The third part begins in the garden of the institution, but the setting becomes increasingly abstract. A love scene between Lea and Ram is played out in the most symbolist terms, and leads to gently transcendent conclusion. Ram gradually attains a living, human status. Milleocchi and Millebocche are vanquished. Finally, the Ladies of the Frontier reappear and announce that Lea’s actions have redeemed mankind. But the stage action gets increasingly abstract in the last half hour, and all these conclusions are merely suggested, a philosophical ending but also an anticlimax.

As should be clear from this outline, the narrative draws on many operatic plots, most notably, Götterdämmerung, Parsifal, Elektra, and Lulu. But the abstraction of the setting allows these diverse characters to interact without too many logic gaps. The cast is lead from the top by Allison Cook in the title role. Cook is a new music specialist and has a secure tone and commanding stage presence. She is a mezzo, and Casablancas makes good use of her lower register, which always projects clearly, even across the huge orchestra. Millebocche  and Milleocchi are performed by Sonia de Munck and Felipe Bou. So female and male—though their costumes and tessitura are gender ambiguous. The pair are a real menacing presence, something that Argullol emphasizes by making their appearances increasingly rare and brief. As Ram, José Antonio López seems to be made of stone in his early appearances, but gradually takes on human form as the opera goes on, an impressive make-up transformation. Casablancas is clearly intent on avoiding a traditional operatic relationship between Lea and Ram, casting the roles as mezzo and baritone. The most imposing characterization is the Dr. Schicksal of Xavier Sabata. The use of countertenor voice is so ubiquitous in modern opera as to risk cliché, but here it is ideal. The role is modelled on Klingsor, although with much more to sing. The idea of ringmaster-turned-psychiatrist sounds ridiculous, but Sabata pulls it off with his energetic and unpredictable behavior. He also has a huge voice, even in the upper range.

The staging (director Carme Portaceli, sets Paco Azorín) presents the action in a grimy industrial setting. The sets are simple metal grilles, onto which pastel lights are projected. A metal cage descends onto the stage to create the sense of moving from the mythical world to the real world, and then to show the transcendence of the lovers at the end.

Casablancas writes for a huge orchestra. There are occasional ecstatic outbursts from the pit, but on the whole the orchestral textures are reserved. In particular, the percussion is much more in the background than in much modern opera, although the bass drum is used to impressive effect. Instead, the flute and oboe soloists are the focus of the orchestral textures, subtle and songful accompaniments to the melodic lines. Conductor Josep Pons has an impressive background in modern opera and gives a dramatically charged but well-balanced reading here.

The sung languages are a bit of a mix. Casablancas instructs that the soloists sing in Italian, while the chorus sings in the vernacular of the audience, which in this case is Catalan. The difference between them is not great, but the subtitles are most welcome.

The camerawork for the video (director Miquel Àngel Raió) is ... creative. A camera glides on a boom across the orchestra pit, often zooming in on individual players from above. Lots of closeups of the soloists too. Dr. Schicksal has a camera attached to his wrist, which he points at his patients as he interrogates them. Presumably those closeups appear on a screen above the stage as well, but as cutaways in the video edit they really stand out. Sound and picture are good—TV quality—but not excellent. The sound is only in two channels, even on the Blu-ray. The bonus is a short series of interviews with composer, librettist, cast, and crew, each of their soundbites a small but valuable clue to what the opera is all about.