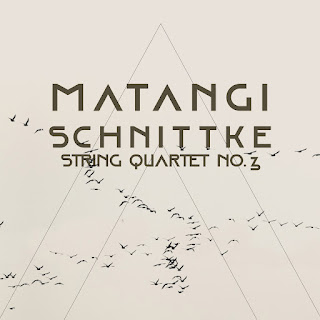 This new album from the Dutch string quartet Matangi is titled Outcast. In the liner notes, they explain, “This is an ode to musical troublemakers and outsiders; three Soviet-Russian composers who wrote music that went dangerously against the tastes of the regime under which they lived. Described as ‘avant-garde’ or ‘western’, they stuck their necks out for their work....” That last statement, about sticking their necks out, is certainly true of all three composers: Schnittke, Silvestrov, and Shostakovich. But the argument is taken too far. To underline their dissidence, all three composers, and their music, are presented as explicitly political, which they aren’t. The idea of any of them being condemned as ‘western’ is also questionable. Later in the liner notes, we read of Schnittke that, “...in the 1960s he traveled as much as possible to the West to learn about its various musical styles.” He didn’t. Schnittke lived in Vienna until 1948, but after that did not visit the West again until 1977. I would say that all three composers can equally be heard as Russian/Ukrainian. And, more the point, while they all exercised considerable artistic freedom, none of them did so simply as an act of defiance.

All that aside, the real reason for this program is to find a home for the group’s recording of Silvestrov’s First String Quartet (1974). Matangi has worked extensively with Silvestrov, who has even featured at their (Un)Heard Music Festival in Holland. Their performance of the quartet is stunning. The album was recorded in studio in Belgium, and the engineers have furnished the players with a warm, even ambiance. That proves ideal for Silvestrov’s airy, contemplative textures. The music is not explicitly religious. Rather, it is made up of fragments of motifs and melodic lines. You get the impression that coherent voice-leading is at the heart of the music, but that it has been dissipated and strung out. Matangi maintain just the right amount of propulsion and coherence to keep the focus, and that warm ambience also helps to hold the textures together.

The Silvestrov is framed by Schnittke’s Third String Quartet and Shostakovich’s Eighth. As a continuous sequence, this makes a lot of sense. Schnittke’s work is based on quotes from Lassus, Beethoven, and Shostakovich—his musical monogram that forms the basis of his Eighth Quartet. It begins with a sense of Beethovenian logic and architecture, but gradually becomes more disillusioned with its form, tending to a mediative statis in the last movement. This provides the ideal introduction for the Silvestrov. On its own terms, the Schnittke performance tends a little too far towards this meditative state, partly, no doubt, to fit the ethos of the album, but also because of the warm recorded sound. The Lassus quotation wins out against the Beethoven and Shostakovich, and Schnittke’s allusions to Renaissance polyphony come to the fore.

Similarly, the Shostakovich Quartet begins in the same meditative frame as the preceding Silvestrov, and the first movement is unusually spiritual. Then a jolt with the fast second movement, although again, the warm sound and beautifully resonant tone of the quartet present this music on an epic scale. It lacks bite, and the terse, self-doubting, introspective aspects of the music are barely felt.

But that seems to be the message from Matangi. Shostakovich is expressing “artistic freedom”; its all about him vs. the machine. At the very least, this is a Western perspective on these three composers. The Silvestrov is excellent, and that performance justifies the album’s concept. But in Schnittke and Shostakovich, I like to hear more of the inner psychological drama and less of the public face.