TANEYEV Symphonies Nos. 1–4. Cantata No. 1, “John of Damascus.” Suite de Concert. Oresteya Overture. Oresteya, Act III: Entr'acte: The Temple of Apollo at Delphi. Adagio in C. Overture on a Russian Theme. Cantata for the Unveiling of the Moscow Pushkin Memorial, "Ya pamyatnik sebe vozdvig nerukotvorniy" (I Have Built myself a Monument not Made by Hands). Canzona. Overture in d 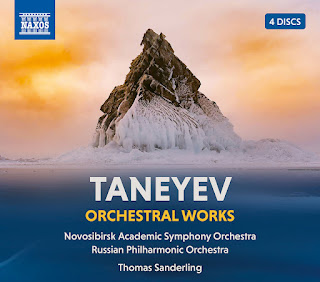 The Taneyev symphonies are rarities outside Russia, and the best chance you have of hearing one live is from a touring Russian orchestra. But for Russian orchestras, they are familiar repertoire, especially the Fourth, and so a good number of recordings have appeared in the Soviet and post-Soviet eras, from conductors and players who clearly have a good understanding of Taneyev’s idiom. The composer was closely linked to Tchaikovsky, leading to inevitable comparisons between their works. Taneyev was more the contrapuntalist, while Tchaikovsky was the better melodist, and indeed the better composer. But Taneyev’s four symphonies inhabit the same dramatic and discursive sphere as Tchaikovsky’s first three, and so performing styles for Taneyev align closely with those for early Tchaikovsky.

This new set from Naxos is titled Taneyev Orchestral Works, but is simply four separate discs, in their original cases, boxed together in a new card sleeve. The recordings date from 2008–2010 and want for nothing in terms of sound engineering. The packaging, however, shows this to be a budget offering, although the liner notes for each issue are by Taneyev specialist Anastasia Belina, and are readable and informative.

Most of the works in this collection—and not just the symphonies—open with quiet brooding introductions, from which the main material bursts forth. For Thomas Sanderling, those introductions are clearly a central element of Taneyev’s message, and each of them here is presented very quietly, and generally very slow. The switch to the faster main themes is a jolt each time, but from then on Sanderling takes steady tempos, usually slightly slower than the norm, and with only modest rubato. The approach works well, and the results always feel well structured and coherent, an impressive feat in this repertoire.

One advantage of a complete Taneyev symphony cycle is the opportunity to explore the less-performed early symphonies. The First (1874) is the shortest at just over half and hour, and it does not have the breadth or dramatic ambition of the later works. Sanderling’s patient but full-bodied account gives it its due, and the orchestra gives a clean and precise account. That high level of orchestral execution is a common feature across this set. The Novosibirsk Academic Symphony Orchestra may not have the flair and panache for their Moscow and St. Petersburg counterparts, but their technical precision is on a similar level. The unity of the string tone is particularly impressive, as
is the controlled power of the brass.

The Second Symphony is another pleasant discovery for those exploring Taneyev’s lesser-known works. Like the First, it is an early work, dating from the mid-1870s. Taneyev did not complete the work, and the edition presented here was compiled by Vladimir Blok in 1977. He edited the outer movements and orchestrated the Andante second movement: a planned Scherzo was never even begun. It is all gorgeous music, with heart-on-sleeve melodies and expansive Romantic gestures. And, again, Sanderling’s measured but emotive account feels just right. The Third (1884) and Fourth (1898) Symphonies are more familiar, and both, the Fourth in particular, are recognized as Taneyev at his best, more dramatic and supple than the first two, and also more coherent.

In terms of competition, the Fourth Symphony has the most impressive discography. The Svetlanov account, rereleased on Melodiya in 2015 (10 02374) has the most drama and power of any available account and remains the one to beat. Also worth mentioning is the Neeme Järvi version with the Philharmonia (Chandos 8953). Järvi is in uncharacteristically expansive mood here; the Philharmonia sound surprisingly Russian too. For the first three symphonies, the obvious comparison is with Valery Polyansky’s set on Chandos (the First and Third there described as premiere recordings). Polyansky is generally faster—much faster in the first movement of the Third—and applies more rubato. In particular, he doesn’t make the emphatic shifts between slow introductions and faster main themes, instead smoothing over the tempo changes with coherent orchestral textures from one section to the next. The present accounts have superior orchestral playing, although one could argue that the narrower woodwind tone and more precarious balances of the Russian State Symphony Orchestra under Polyansky are more authentically Soviet/Russian.

For the next disc, Sanderling moves to the Russian Philharmonic Orchestra (since renamed the Moscow City Symphony) for accounts of the First Cantata, “John of Damascus,” and the Suite de Concert. The First Cantata is a choral spectacular, and it is another work in which the drama grows out of quiet, atmospheric textures. Sanderling’s account is clean and precise, but it lacks both the atmosphere of the quiet music and the drama later on. Again, the top contender here is Svetlanov (coupled with the Fourth Symphony), but Mikhail Pletnev gives a similarly fine account on DG 471 029-2. It is shame that Naxos have not recorded the Second Cantata, “At the Reading of a Psalm,” although, again, they are unlikely to match Pletnev’s superlative account (Pentatone, reissued on Alto). The Suite de Concert is a concertante work for violin and orchestra. It is Russian and rustic, but lacks virtuoso flair. The Oistrakh recording from 1956 (last reissued as EMI 0946 3 61570 2 3) is the benchmark, but violinist Ilya Kaler here gives a fine account, on a par with Lydia Mordkovitch under Neeme Järvi (Chandos 10491), the other modern option.

Finally in the Naxos box, a disc of miscellaneous orchestral works. The most important is the Oresteia Overture, linked with the opera of the same name, but eventually separated off as a symphonic poem (making the Naxos listing, Overture to Oreseia, slightly misleading). It is an excellent work and is given a fine account. Neeme Järvi’s version (coupled with the Fourth Symphony) is also excellent, but in this case, the paucity of available recordings makes any new version a welcome proposition. Most of the rest of the disc is early music, elegantly played but inconsequential.

As that final disc demonstrates, the primary benefit of this set is covering repertoire that may not otherwise be in your collection. On that basis, it is a success, as almost everything here is given in fine accounts. However, the Fourth Symphony and First Cantata deserve to be heard with Svetlanov, and the Second Cantata is a glaring omission, for which collectors should turn to Pletnev. Otherwise, recommended.