Barry In The Asylum Fidelio Trio 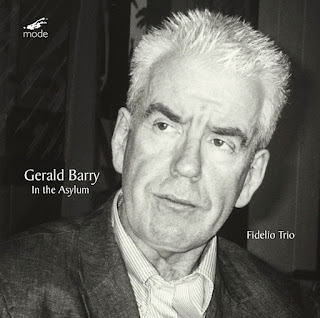 The Irish composer Gerald Barry (b. 1952) has a singular voice. He studied in Cologne with Stockhausen and Kagel, the two teachers passing down iconoclasm and absurdist humor respectively. Barry’s music avoids direct expression, favoring instead mechanistic repetitions and angular but unpredictable rhythmic processes. Repeating note cells churn away, without nuance but with pauses interspersed seemingly at random, as if satirizing the concept of phrase structure. It is a confrontational aesthetic, more often met in the concert hall or opera theater—Thomas Adès has championed his orchestral music and his operas, most notably The Importance of Being Ernest, have been well received on both sides of the Atlantic, his humor taken as a bold corrective to the seriousness of other major contemporary opera composers. Here, we have a collection of chamber works, for various combinations related to the piano trio (plus or minus one instrument) that demonstrates a similar aggressive playfulness, set in an even clearer perspective by the austerity of means.

The program opens with 1998 for violin and piano. In his typically esoteric liner notes, Barry compares the course of the music to the trajectories mapped in a particle accelerator. But he has no intention of telling us where the music came from, just how it appears to him now, “It is as if it were written by someone else and I woke to find it at the bottom of my bed like a Grimm fairytale.” The performance, by violinist Darrah Morgan (the motivating force behind the project) and pianist Mary Dullea, is excellent. The expression, or rather lack of it, is deadpan from both players, but the Pointillistic textures are maintained, without flagging or fatigue, for the full 22 minutes of the work’s duration.

All day at home busy with my own affairs is a short solo piano work performed here by the composer himself. It dates from 2015 and also forms part of his as-yet unperformed opera Salome. Does this recording date from the same sessions as the other works? The piano seems duller and less immediate, but that might just be Barry’s more sullen approach to keyboard technique.

Midday is performed here in a version for violin and piano, but it also exists, the composer tells us, in a “loud version” for eight horns and two wind machines. That is hard to square with the delicate pizzicato textures and high violin filigrees we hear throughout this version. Les Vieux Sourd for solo piano, is a chaotic disassembly of Auld Lang Syne. Baroness von Ritkart is a series of three very gentle miniatures for violin and piano. These show a different side to Barry’s compulsive aesthetic, closer to the daydream ambivalence of early Cage. The two following works also open with gentle textures, In the Asylum, for piano trio, which gives the album its title, and Ø, for piano quartet. But the disorder is soon ramped up, making the listening experience increasingly surreal and disorientating. Finally, Triochic Blues, not a blues, of course, but a portrait of a three-testicled castrato on the run from Dublin magistrates. As ever with Barry, the music is only slightly less lurid than the composer’s own descriptions, with the three instruments of the piano trio matching each other in exact unison in an erratic caper around registral extremes.

The Fidelio Trio and friends do an excellent job of presenting Barry’s music, presenting everything straight-up, without any direct acknowledgment of the humor and sarcasm, which are more than capable of making themselves felt. The recordings were made at the Music Department of Queen’s University, Belfast and, with the curious exception of the composer’s piano solo, all sound fine. The liner notes by the composer are as infuriating as the music itself, short aphoristic texts relating, often tangentially, to each work and an autobiographical essay, “Never was a shade” that defies any description from me. In sum, a representative survey of Gerald Barry’s often challenging chamber music, and a fine addition to a discography otherwise dominated by recordings of his operas.