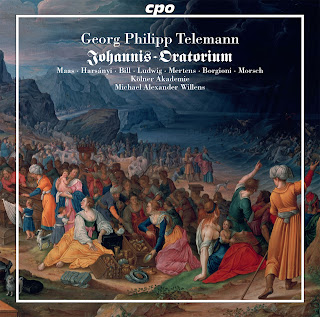 Michael Alexander Willens has been surveying Telemann’s sacred choral music for several years on CPO. After numerous releases of sacred cantatas, in 2019, he turned his attention to the Michaelis-Oratorium (CPO 555 214-2, reviewed by James Altena 43:2). Telemann’s sacred oratorios are much like his cantatas, musical interludes for church services. They are loosely structured around Biblical narratives, but with regular contributions for allegorical characters too. They are generally grand affairs, designed for special occasions and feast days. The major work here, at almost an hour, Gelobet sei der Herr, was written for the Feast of St. John, and Bequemliches Leben, gemächlicher Stand for Misericordias Domini, the Third Sunday after Easter. The librettos are by the Hamburg poet Albrecht Jacob Zell, and when published were dedicated to the more familiar Barthold Heinrich Brockes.

Zell takes a tangential approach to the birth and naming of John the Baptist, taking his narrative instead from the Book of Exodus, the common themes prophesy and salvation. The story tells of the flight from Egypt, from the death of Pharoh’s son to the parting of the Red Sea. The chorus variously portrays the Israelites and the Egyptians, most dramatically at the Red Sea, “Das Meer ist zerteilt,” where the two groups alternate, back and forth, across the waters.

For all the implied drama, note writer Ute Poetsch informs us that Telemann had only about 20 instrumentalists at his disposal, which is about the number Willens employs. Still, there is plenty of dramatic tension here. There is also an interesting solo timpani number near the end, which segues into drum-themed chorus of praise, “Schlaget die Pauken.” The chorus is also of modest size (15 singers listed) but delivers forceful accents and swift dynamic shifts as required. Telemann writes some elegant woodwind obbligatos, and the warm sound of the Baroque flutes in a modest church acoustic (the recording was made in the Immanuelskirche, Wuppertal) is a satisfying support to the aria “Als Sklaven mussten wir am Joch der Sünden ziehen.”

That number is taken by bass Mauro Borgioni, in the role of “Divine Contemplation” (he also plays a timorous-sounding God). He is one of several young soloists employed here for the brief arias and recitatives. Sopranos Rahel Maas and Elena Harsányi are also ideal, both singing with pure but warm tone. More controversial, though, is Klaus Mertens, who dominates the first part of the oratorio in the role of Pharoh. When this was recorded, Mertens was already in his 70s. Generally, his tone is stable and clear, but Telemann has a tendency to raise the tessitura when things get dramatic, and Mertens struggles at the top.

The second oratorio, Bequemliches Leben, gemächlicher Stand, takes as its theme the Good Sheppard of parable. Zell concocts a scenario in which the Good Shepherd must pass on his knowledge and values to a group of hirelings. So it is Mertens again as the Shepherd instructing the chorus, as his hired help. Borgioni is now a solo hireling, and there are also arias for Maas and Ludwig in the allegorical roles of Prayer and Consideration.

Generally, Willens avoids the worst excesses of HIP orthodoxy. In both works, he strives for warmth from his modest forces, and tempos are never excessively fast. In the first oratorio, he employs emphatic accents and clear dynamic changes to carry the drama. That is less of a requirement in the more contemplative second work, but the generally relaxed atmosphere is punctuated with occasional fast movements, notably the chorus “Wir fressen das Fette.”

CPO makes no claim to the effect, but these appear to be first recordings. The music is classic Telemann, though possibly on a smaller scale than the billing suggests. The only objection that the performance raises is to the decaying tone of Klaus Mertens, but given that Alexander Willens, Rudolf Lutz, Masaaki Suzuki, and so many other luminaries of the Baroque world remain faithful to him, I’m willing to concede my view as a minority position.

This review appears in Fanfare issue 46:3.