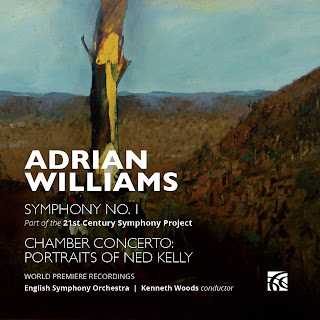 This album is the fifth in the 21st Century Symphony Project, a commissioning campaign by conductor Kenneth Woods, designed to survey the contemporary symphony in the UK, and also presumably to give it a boost. Previous recordings have showcased new symphonies by Matthew Taylor, Philip Sawyers, and David Matthews. Woods has an impressive loyalty to each, and the completion and performance of one symphony often leads to a further commission for the project.

Adrian Williams (b. 1956) is new to the symphonic form, but not to large-scale orchestral writing: his Cello Concerto was given at the Proms in 2009. Woods approached Williams to write this symphony, and the work is dedicated to him, “for giving me hope,” as Williams puts it.

On the whole, I would rate this new symphony a major success. Williams has a style that works beautifully with the large scale and the abstraction of symphonic writing, and there is never any sense that he is over-extending his ideas or struggling to fill the time. He has his own distinctive voice, making comparisons with other composers difficult and often misleading. However, his conception of the symphony as a form owes much to Shostakovich and Sibelius. I’m also reminded of Walton’s First Symphony, especially in the way that Williams’s first movement unfolds so naturally, the music expansive and dramatic, but also coolly confident and assured.

In his brief liner introduction, Williams writes that the work begins with a rising motif, Eb–F–C, and that this returns throughout. The motif itself carries much of the work’s character. Its rising profile matches the “hope” of the dedication, and through much of the work we hear the rising motif against darker backgrounds—hope in the face of despair. The motif is also made up of tonal intervals, although it does not fit into any obvious tonality. That, too, reflects the harmonic language of the music, broadly consonant and usually tied to tonal centers, though often with modern-sounding harmonic complexes. Williams writes that the structure is based on a conflict between tonal centers derived from the motif, Eb and F.

The work is in a traditional four-movement structure. The second movement is a lively Scherzando, though still with some agogic weight. The third is a smooth Lento. This was the last part of the symphony to be completed, and was motivated by news footage of bush fires in Australia. Another late modification was the (relatively) positive character of the finale. This last movement is huge, almost 18 minutes, but plays out as a smooth and gradual intensification of broadly consonant orchestral textures. Structurally, it is the most ambitious section of the symphony, and, as with everything before, it succeeds in matching its material to its scale.

For me, the first movement is the best part of this new symphony. The variety of material and expression is well balanced against the inscrutable but highly coherent structure. The four movements do not have enough variety between them: the second is too similar to the first, and the third is too similar to the fourth. Of course, you can hear it as a grand two-movement form à la Saint-Saëns, and as such it works fine.

The coupling is an earlier Williams work, the Chamber Concerto of 1998. The work’s subtitle “Portraits of Ned Kelly” points to a remarkable friendship. At the time, Williams was a neighbor of the Australian painter Sidney Nolan on the Welsh borders. Nolan even let Williams practice on his piano. The Chamber Concerto was inspired by Nolan’s famous series of portraits of Ned Kelly. Kenneth Woods writes in his liner note that the piece originally had a narrative, which closely followed Kelly’s exploits, but became more abstract as composition progressed. Nevertheless, you hear a chase on horseback, mid-way through, with driving col legno from the strings. The abrupt ending also suggests Kelly’s death by hanging, and Woods rightly points to Till Eulenspiegel as a model.

The scale of the textures belies the modest instrumentation, just 11 players, one-to-a-part stings and woodwinds, plus French horn and harp. The opening is as arresting as that of the symphony, and Williams again shows an impressive talent for extended forms, the work in a single movement of 22 minutes. Again, the style is so distinctive that it is hard to name influences. A European Modernism, from Russian-period Stravinsky through to Ligeti, has been taken on board and digested into a distinctive approach. The textures are often prickly, scurrying stings and staccato woodwind interjections. The horn (James Topp) is a dominant presence in most of the sections, its more rounded sound bringing focus to the otherwise disparate textures.

Performances and recording are as fine as we have come to expect from Kenneth Woods and the English Symphony Orchestra. Both pieces find the players in excellent form, and the 11 players of the Chamber Concerto deserve particular praise for the lyrical virtuosity they bring to this highly demanding music. The recordings were made at the Nimbus’s own Wyastone Concert Hall, conveniently located for both the orchestra and the composer.

The “No. 1” might seem like an affectation for the title of the symphony presented here. But no, Williams is now hard at work on his Symphony No. 2, another English Symphony Orchestra commission (as here, with funds from the Steven R. Gerber Trust). The recording of that work is eagerly awaited. Watch this space.

This review appears in Fanfare issue 46:4.