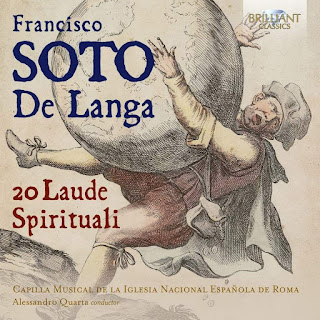 Francisco Soto de Langa (1534–1619) was a Spanish singer, publisher, and composer, active in Rome. He was probably a castrato, and if so was the first to be employed by the Papal Chapel, from 1562. He is best remembered today for his anthologies of lauda, most of them by other composers, but a substantial number by Soto himself, which are presented on this album.

“Laude sprituali” are a curious hybrid genre of sacred music that closely follows secular and vernacular conventions. The liner note, by Andrés Montilla-Acurero, traces the form back to Occitan troubadours of the 12th century. The defining feature is a bold melodic line, sometimes folk-influenced, but with regular, unsyncopated rhythm. Soto’s laude include counterpoint, but usually only in two parts, or with two groups of singers in clearly defined opposition. Just as common are numbers for solo singer with Baroque guitar accompaniment.

This recording, which was made in 2019 to mark the 200th anniversary of Soto’s death, is from a Renaissance group based in Rome. Alessandro Quarta is listed as “guest conductor” suggesting that he does not lead every number here, just the larger ensembles. Six singers are listed, but have a fulsome tone when singing Soto’s hearty homophonic textures. Women, rather than boys or countertenors, take the upper lines, a practice the liner notes make a tenuous effort to link with Soto’s time. True or not, the mixed voices have the effect of secularizing the sound further.

The ensemble makes various efforts to increase the timbral variety. The opening number has robust percussion, but this is only heard on a few of the subsequent numbers. One number, Alma dexa la tierra, begins with several verses played by an ensemble of bowed strings before the voices enter. The use of a small organ in place of plucked-string continuo also provides welcome variety.

The recordings were made at the Sala de conferencias de la Iglesia Nacional Espanola de Santiago y Monsterrat in Rome (the group is associated with the Spanish church in Rome), and photographs in the liner show sessions taking place in what looks like a museum setting. The acoustic is warm, but the mikes are set close, and textures are always clear.

The packaging for this release belies Brilliant Classics’ budget origins, and we get a substantial, glossy liner of 16 pages, with the Montilla-Acurero essay and artist bios, all in English and Spanish. No texts or translations though, sadly. The short running time should also be noted. Given the number of anthologies that Soto published which include his own laude, plus the two publications, of 1599 and 1600, wholly dedicated to his own works, there is clearly more material that could have been included.