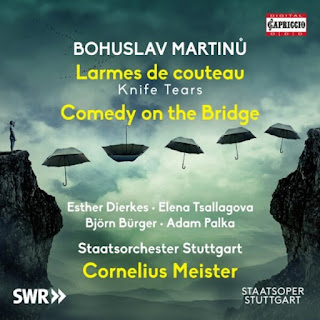 These two one-act operas find Martinů in cabaret mood, writing sprightly music for small and varied ensembles, and always maintaining his sense of humor, even when the plots turn macabre. The composer lived a peripatetic existence, which is demonstrated by the languages of these librettos. Larmes de couteau (Knife Tears) was composed in France in 1928. He set a French text, but the work was first performed in Czech, in Brno in 1969. The present recording is the first with the original French text. Comedy on the Bridge was also composed in France, in 1935, but to a Czech text; it was a commission from Prague Radio. Martinů later adapted it to an English-language text, for a student performance at the Mannes School, where he was then teaching, in 1951. That English version is presented here.

Larmes de couteau has a ghoulish plot. It is a three-hander, featuring Elénore (Elena Tsallagova), her mother (Maria Ricccarda Wesseling), and Satan (Adam Palka). Elénore is in love with her neighbor, Saturne, but he has hanged himself. Her mother tries to turn Elénore’s attentions to Satan, but she is not interested. Eventually Elénore commits suicide, by the knife of the title. Saturne then returns from the dead, as does Elénore, but a happy ending is diverted by the resurrected Saturne being Satan in disguise.

Martinů writes light, catchy music that keeps pace with the story’s many changes of direction and mood. The orchestra is small and is dominated by the one-to-a-part winds, and by the piano. The distinctive sound of the banjo cuts through on several occasions, and there is also a harmonium, accompanying much of the singing. Vocal performances are good, and the French sounds idiomatic, even in the many spoken interjections (all accompanied). Elena Tsallagova has a more operatic tone, while Adam Palka is lighter, and occasionally slides playfully between the notes.

Comedy on the Bridge has a larger cast, with five singers and three spoken parts. The scenario, based on a story by the Czech dramatist Václav Kliment Klicpera, involves two parties, both stranded on a bridge. They are in no-mans’ land, between rival armies in a war, and guards at both ends of the bridge prevent them from leaving. Martinů again writes for a small orchestra, and again with prominent piano. But the balance is more towards the string body here, with regular military tattoos from percussion and trumpet. The recording is well cast. The opera was designed for radio, and Martinů writes distinctively for each of the voices, and this is reflected in the casting. The opening is dominated by Steven Ebel as the Enemy Sentry (one of the spoken roles), shouting “Stop!” and “Stand back!” in a pushy American accent. None of the singing roles are taken by native English speakers, but all do a credible job of (British) English in their performances.

Conductor Cornelius Meister is proving ever-more versatile with the expanding range of unusual operas he is recording—mostly from the 20th century. He has also recently recorded a well-received cycle of Martinů symphonies, with the ORF Vienna Radio Symphony Orchestra, also for Capriccio (41:4). The recordings at hand were made with Stuttgart State Opera, where Meister has been Generalmusikdirektor since 2018. They appear to have been recorded under studio conditions, without an audience—a lockdown project perhaps? The results can sometimes sound a little studio-bound, and the cabaret style of both works suggests a certain amount of audience interaction, absent here. Still, they are good, vivid readings, very much in the spirit of the music—absurdist in all the right ways. Excellent notes from Jens F. Laurson fill in the background to what he calls these “neglected mini-operas,” and full librettos are included, with side-by-side translations into English and German for Larmes de couteau and into German for Comedy on the Bridge. In sum, an attractive follow-up project to Meister’s Martinů symphony cycle for Capriccio. The music is not profound, but it sheds a fascinating light on one of the less well-known aspects of the composer’s exceptionally diverse output.

This review appears in Fanfare issue 46:4